It’s time to break out a box of tissues. A new season of Relative Race premieres on BYUtv Sunday, September 22nd at 8pm ET/6pm MT. Also found at RelativeRace.com and BYUtv.org, the show brings together the power of DNA and documentary evidence to find family members for 4 teams that have never met them.

Just as seasons change in a temperate climate zone, Relative Race has modified the formula for team success each season. Nevertheless, the basic premise has remained the same. Relative Race is a 10-day race that takes place in real time for each of 4 teams. They meet a DNA relative each day. This season only married couples are represented so they will not know until they arrive at the house whose relative it is. Some team members hope to meet a biological parent. Others hope to meet whatever family they can!

When teams arrive at their destination, they must take a city selfie and complete a challenge before they receive the address to their new relative’s place. Challenges have varied over the seasons, but they spark great ideas for family reunions.

Each team travels with a production crew and time is strictly kept. According to Dan J. Debenhem, host of Relative Race, the cameras roll from about 6 a.m. to 10 p.m. each day. For accurate race times, the clock is stopped whenever a crew decides to interject with a reaction shot, but the clock never stops for team-chosen breaks, such as when Joe of Team Black season 4 *needed* to wash their car…lol :-)

Additionally, travel times are determined by estimated times provided on map apps that are not accessible to the teams. The final outcome is based on how close each team comes to their allotted time. Under or over time, the teams are ranked. First place receives a benefit for the next day, such as 5 minutes of GPS or immunity, or a 10-day benefit that can help them in the final competition. The chances of making it to day 10 is a gamble, but it is the most popular choice. The team that comes in last each day receives a strike and, after 3 strikes, that team is out of the race.

Through the seasons of Relative Race, different combinations of family relationships have been represented as teams: married couples, brothers, sisters, brother/sister, father/son, and father/daughter. Just in case Dan or BYUtv reads this post, may I suggest a mother/son or mother/daughter team in an upcoming season? I might even know someone who’s interested. :-)

Season 6 Teams are as follows:

Now that you’ve met the teams, pop some popcorn, make a pizookie, or gather your favorite snacks Sunday night and tune in at 8 p.m. ET/ 6 p.m. MT for the premiere of a new season of Relative Race! (And, don’t forget the tissues.)

P.S. Just in case your significant other prefers Sunday Night Football, Relative Race posts the episodes soon after they air to be viewed on demand *or* subscribe to NFL Game Pass and the significant other can catch any of the games on demand in timesaving increments of about 45 minutes each. Just sayin’

A few Relative Race days ago, Joe Henline of Team Black asked on Twitter what snacks everyone would be enjoying for that day’s premiere. Our family has a tradition of baking pizookies each Relative Race night. A bit of interest was shown in the recipe, so here it is with a holiday twist: 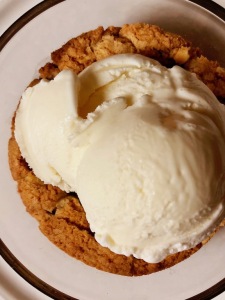 Mix in the dry ingredients.

Add 1/4 cup of mixture to each 1- or 2-cup ramekin, small baking dishes. Press down. Bake through until golden brown, about 10-15 minutes. Remove from oven. Add a scoop of vanilla ice cream. Add toppings as desired.

Yields about a dozen.