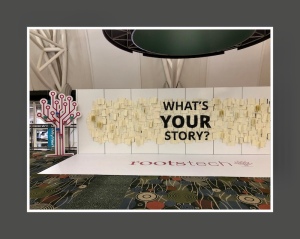 RootsTech 2020 is underway at the Salt Palace Convention Center in Salt Lake City, Utah. It’s an amazing conference whether you are onsite or participating remotely. This year’s theme is “The Story of You” and last night Steve Rockwood, CEO of FamilySearch International, encouraged those of us in attendance at the media dinner to tell not only ancestor stories but our own. 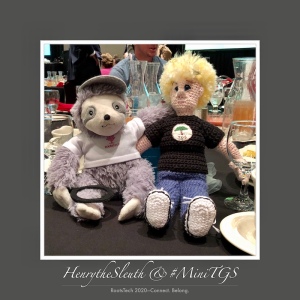 This is my tenth year at RootsTech and Henry the Sleuth joins me for the first time. He has already met a friend, #MiniTGS. It is just one example of RootsTech’s tagline, “Connect. Belong.” There are a lot of people to meet in the next four days. Participants are coming from 49 of the United States and 55 countries! 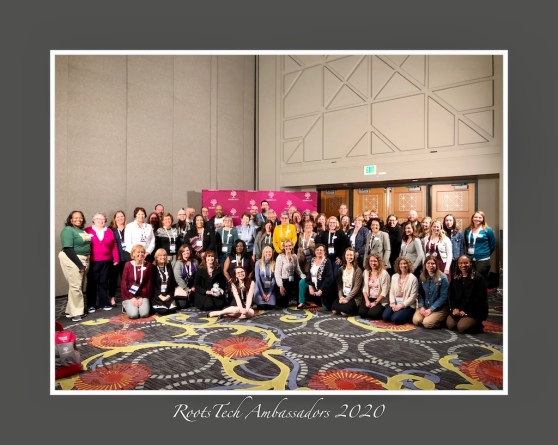 Today’s live-streaming schedule is as follows. Just log on to RootsTech.org and you’ll be virtually onsite. It’s a great opportunity to expand your genealogical education. Don’t forget to download the RootsTech app for access to all of the handouts. 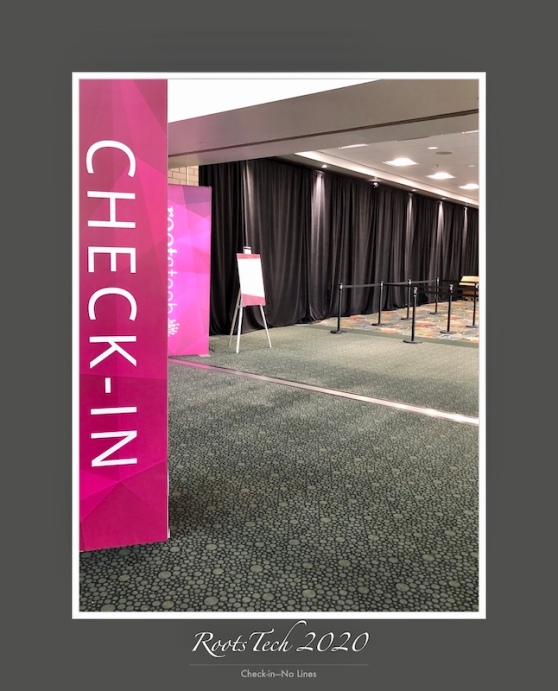 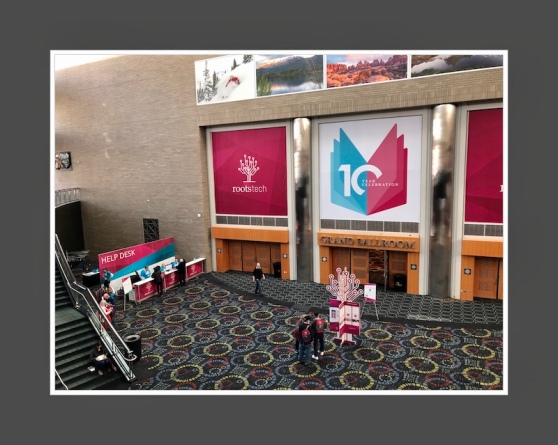 There is always someone who can offer assistance at the Help Desk. In addition, there are people in RootsTech “Ask Me Anything” turquoise t-shirts and the RootsTech Crew ruby t-shirts who can provide just about anything you need. 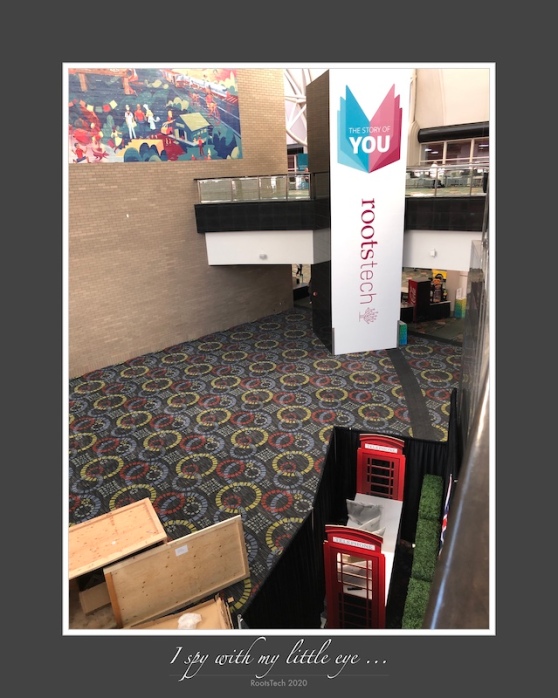 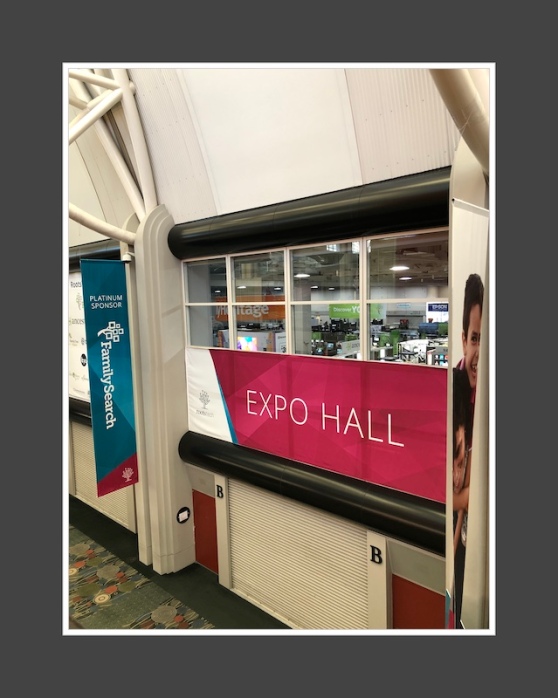 The Expo Hall opens at 5:30 p.m. tonight right after the keynote address. 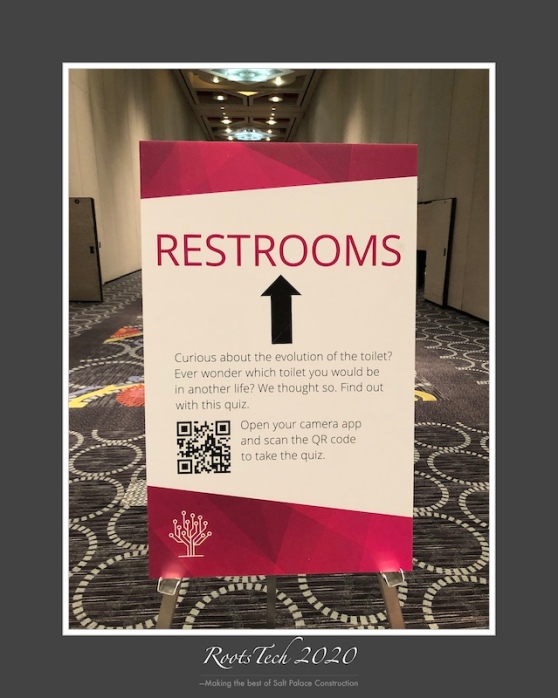 RootsTech knows how to make the best of a situation. With the south end of the Salt Palace under construction, they’ve had to make accommodations since the former restrooms are out of order. I took the “toilet quiz.” It says I’m a “Modern Toilet.” Ha! Ha! An essential piece of information to include in “The Story of Me.” 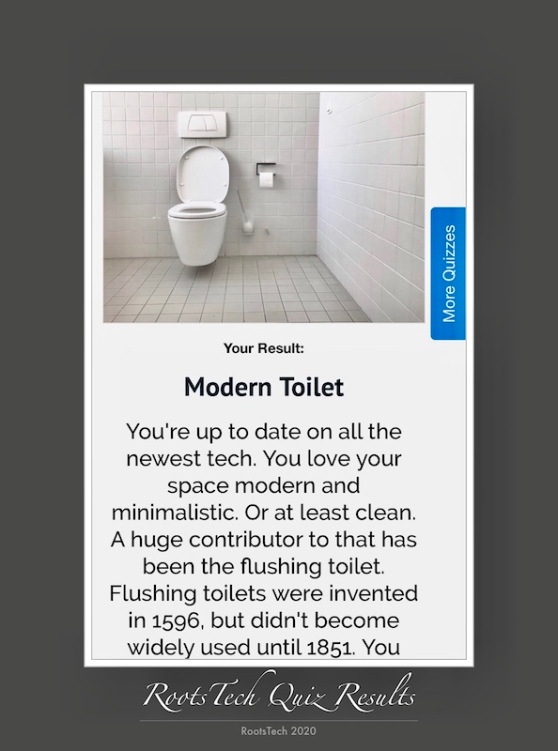 It’s on to day one of RootsTech 2020! If you can’t view the live-streaming today, RootsTech will be posting the sessions on the website for later viewing. Enjoy your day!

It’s been 6 years! Six years since I attended the Salt Lake Institute of Genealogy (SLIG). I’m not a stranger to it. I’ve known about it since its inception. It replaced a winter genealogy conference that took place for a couple of days each January. SLIG was different in concept. Unlike a conference, an institute allows a person to pursue more concentrated learning about a particular topic. There is always more to learn as it relates to genealogy. 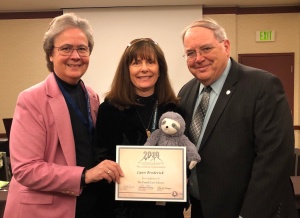 This year the course offerings were exceptional. Upon review of my options, I registered for The Family History Law Library with Judy G. Russell, JD, CG, CGL and Rick Sayre, CG, CGL, FUGA. As Judy is known to say, ‘the law is anything but boring’ and her entertaining style is always a bonus. To truly understand a record a person, must know the law(s) from which it was derived. Laws have purpose. Laws give context. And, although I have spent time in law libraries and in research, digging into the websites recommended in this course makes me feel like ‘a kid in a candy shoppe!’

SLIG is about education. It’s also about networking, friends, and fun. I saw a photo of an elk in the SLIG Attendee Facebook Group and upon arrival to my course, I found Laurie Desmarais with a baby elk on her desk.

I must have forgotten I tossed him in there, but when I opened my case second hour, there he was—a sloth. A gray, 3-toed sloth who had been named Henry on Christmas Day. I promptly placed him on my desk as my genealogy companion for the week. Henry had many opportunities to meet people. He’d introduced himself to those who were having breakfast when he arrived early. He was introduced to J. Mark Lowe, C.G., the coordinator of the Advanced Southern Research course, with interest, but learned that Mark’s course didn’t go south enough for Henry to pursue his family tree. Mark’s course focused on the southern United States, not South America. I would highly recommend Mark’s course in the future for anyone pursuing their U.S. southern roots. 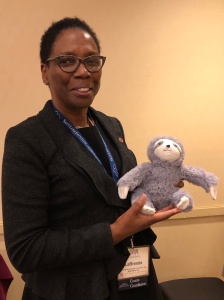 On Monday night, LaBrenda Garrett-Nelson, JD, LLM, CG, CGL gave an outstanding plenary session titled, “We’re All in the Same Boat Now!” One consistent takeaway expressed by those in attendance was that researchers have a responsibility to publish their findings and make searchable the names of those in the records. This is especially important to connect African Americans to their families. DNA has clearly identified that we are all in the same boat. Garrett-Nelson was the coordinator of Course 7 this year: 1619-2019: Four-Hundred Years of African American Genealogy sponsored by FamilySearch. Henry and I stopped by on a break to visit a couple of friends.

Henry and I left the law cohort and met up with members of Genetic Genealogy Tips & Techniques (GGT&T) Facebook Group for a photo and lunch at nearby Olive Garden.

We were actually late to the photo shoot, but were able to catch Blaine for the official supplementary photo.

GGT&T is an active group with over 51.2K members! It includes beginners as well as those at the forefront of DNA as it applies to genealogy. If you’re interested in genetic genealogy, why not join us?

Henry also went to the Family History Library. Upon doing some research, Henry learned that there is another sloth named Henry the Sloth on Twitter. Don’t be confused! Henry is the genealogy sloth and you will know him by his FAN Club! After his week at SLIG, Henry has officially changed his name to Henry the Sleuth. He looks forward to his next genealogy journey—SLIG Academy. :-)

I’ve always heard that a good lawyer knows the law, but a great lawyer knows the judge. I don’t know the truth of that statement, but I know that a good genealogist knows how to find the laws related to sources and the information therein to evaluate genealogy evidence. One site that may be of help to you in the United States is A Century of Lawmaking for a New Nation: U.S. Congressional Documents and Debates, 1774-1873. As the site explains:

Beginning with the Continental Congress in 1774, America’s national legislative bodies have kept records of their proceedings. The records of the Continental Congress, the Constitutional Convention, and the United States Congress make up a rich documentary history of the construction of the nation and the development of the federal government and its role in the national life. These documents record American history in the words of those who built our government.

Books on the law formed a major part of the holdings of the Library of Congress from its beginning. In 1832, Congress established the Law Library of Congress as a separate department of the Library. It houses one of the most complete collections of U.S. Congressional documents in their original format. In order to make these records more easily accessible to students, scholars, and interested citizens, A Century of Lawmaking for a New Nation brings together online the records and acts of Congress from the Continental Congress and Constitutional Convention through the 43rd Congress, including the first three volumes of the Congressional Record, 1873-75.

The week culminated with a completion banquet and awards. Thomas W. Jones, PhD, CG. CGL, FASG, FUGA, FNGS gave the keynote titled, “A Most Enjoyable Journey.” He outlined his remarkable lifetime interest, education, and opportunities afforded to him in the field of genealogy. He is retiring as course coordinator of Advanced Genealogical Methods, but don’t lose heart. I have it on good word that he still plans to teach.

John Phillip Colletta, PhD, FUGA received the Silver Tray Award. As the Utah Genealogical Association website explains, “The Silver Tray Award is given for scholarly contributions to the field of genealogy and family history.Since 1988, it has traditionally been given for publication efforts.”

Karen Mauer Jones CG, FGBS received the Utah Fellow award. According to the UGA website this award is given “[i]n recognition of those living individuals whose distinguished contributions and on-going commitment to the field of Genealogy are of national or international scope, this award may be evidenced by any combination of publications, teaching and speaking, or leadership of major genealogical organizations over a significant period of time.”

Thomas W. Jones, PhD, CG. CGL, FASG, FUGA, FNGS received the Award of Merit, given to honor his service above and beyond the Distinguished Service Award. Tom is a humble man with a plethora of post-nominal letters. :-)

It’s been a busy week for me and Henry. There are over one hundred photos of people Henry and I met at the Salt Lake Institute of Genealogy. As soon as time permits, I will be preparing these memories for publication.

SLIG will be held in 2020 from January 12th through the 17th. Check the UGA website for more details. As of the time of this post, it had not been updated. Registration opens July 13, 2019 at 9 a.m. MDT. The most coveted classes fill within minutes so, if you are interested, mark this date on your calendar.

Copyright ©2019 Lynn Broderick, a.k.a. the Single Leaf. All Rights Reserved. 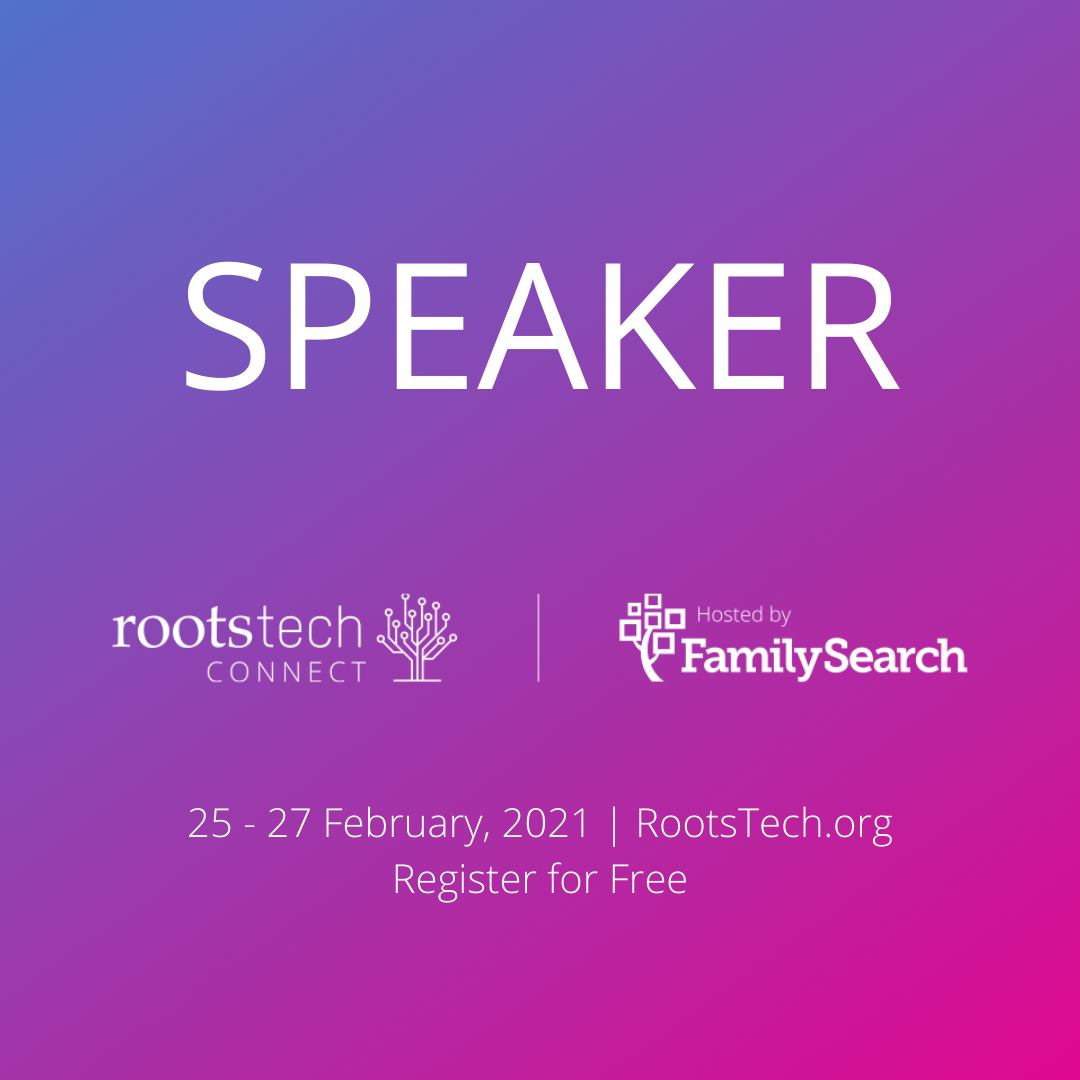 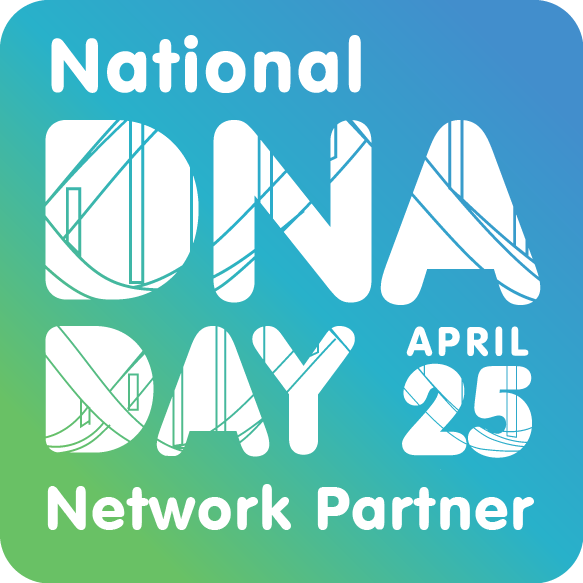 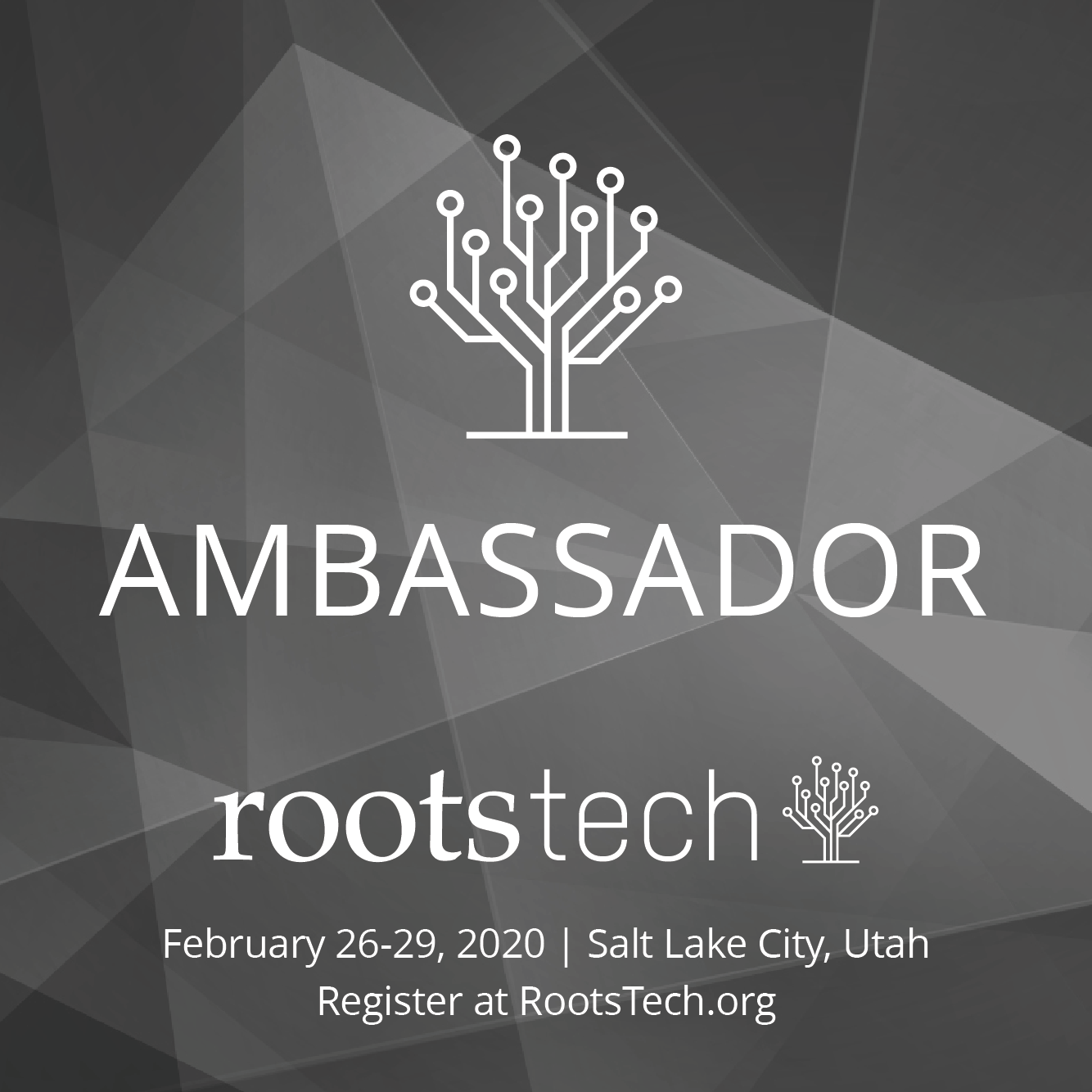 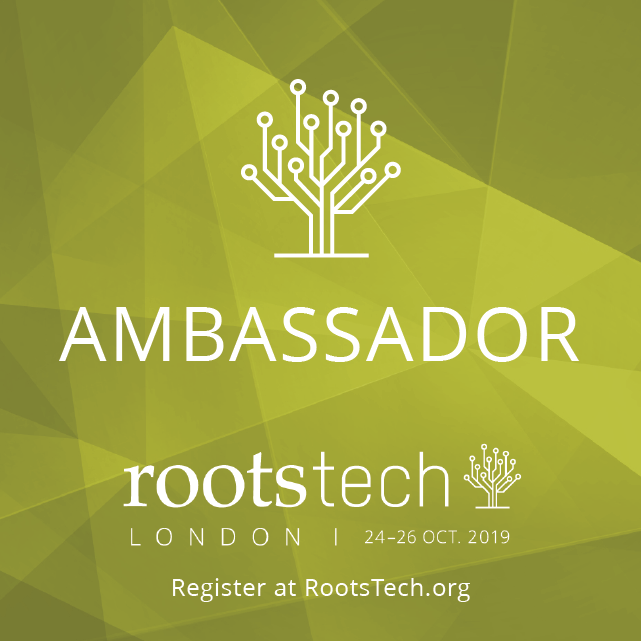